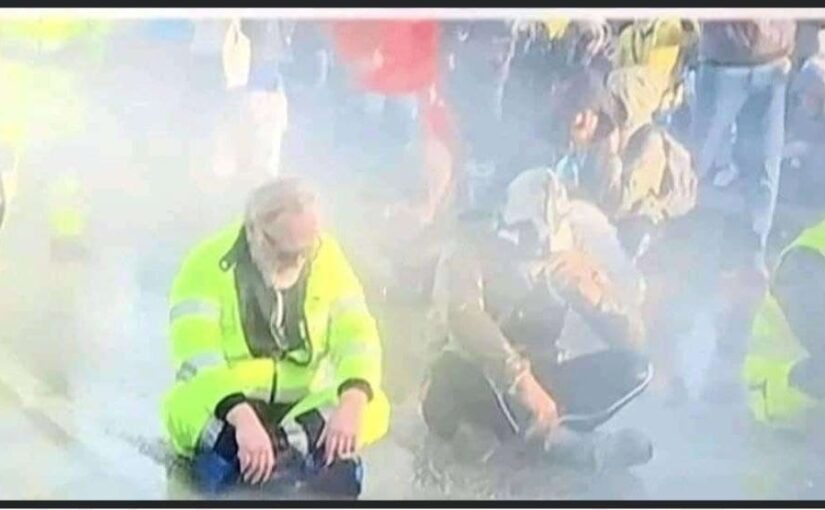 Call for tolerance and non-violence between the parties in Italy

Giuseppe Barbera the Pontifex Maximus of the Gentile community expresses concern about the current situation of political discussion in Italy. While our community does not comment on political events, as there are already party and civic associations and bodies responsible for discussing the Country’s policies, it must be remembered that the approach to interpersonal relations, based on the exchange of ideas and emotions often coming from the soul and spirit, belongs to the sphere of a spiritual way of life. The pursuit of behavior based on tolerance, mutual respect, love and peace, is a fully-fledged part of spiritual ethics.

Despite the silence of the main religious entities in Italy, it is our duty to report the following:

It was with great dismay and discomfort that we saw the poorly managed activities, which resulted in violence against pregnant women, unarmed people sitting in prayer and a serious risk to the safety of the seniors and children. 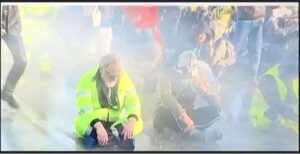 It is not clear from this photo why water cannons were used on protesters sitting on the ground praying. None of the responsible for this action considered that many elderly people present in the square could have fallen to the ground because they were hit by the water jet or simply slipped on the wet ground, with very dangerous consequences for their health! 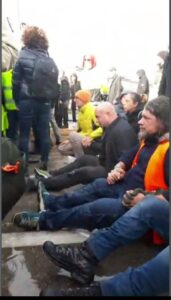 In this other photo we see that the demonstrators didn’t react badly but remained seated to pray and to emphasize their constitutional right to demonstrate and strike. You see water on the ground and them wet, in the cold of October, while they shake hands and hold back every instinct to react, showing great strength of mind and spirit.

An elderly man, leading the procession, felt a little unwell before the forces of law and order began to advance, and instead of being given help, as required by Italian law which actually punishes the failure to help a person who is ill, he was charged by the police in riot accommodation, despite the fact that there was no riot, but simply a crowd of people sitting down!

The order to charge was given to everyone, even against this pregnant woman, who manifested peacefully but had her nose broken with a bat in the face despite her condition and with the risks associated with her condition. 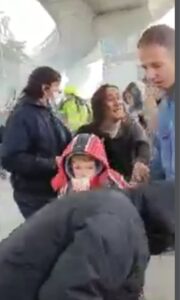 In the proximity of the procession there was a school, from which men and women with children were coming out, and they were affected by a tear gas charge. The most serious fact is that there have been reports of children of few months old, being hit by a tear gas shell in their cots: imagine what could have happened if the shell had accidentally hit the child’s eye! This violates a series of international child protection regulations! 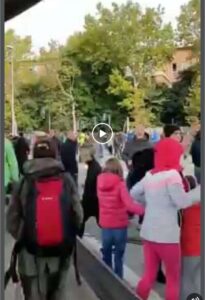 This photo shows children running away after being targeted by tear gas. We have seen videos of citizens and journalists warning the police not to throw smoke bombs in that area, because there was a school there! They went unheeded.

All this worries us.

We are noticing, from social networks to television, that more and more frequently, in order to assert one’s position, one easily falls into lies: we have read newspaper articles that spoke of violent demonstrators, when in fact we had seen live videos of what was perhaps one of the most peaceful manifestations ever seen in Italy. We want, on this occasion, to refer to a very important ethical value: the Truth.

It is the duty of every citizen on this free world to cultivate honesty: Truth for us is life and good, while lies are death and disease, in fact it is said that every time a man lies, a part of the world dies.

Reflecting on what has happened in recent days, we are shocked to witnessing those criminals have been allowed to storm the headquarters of a labor union in Rome, opening the police cordons and letting them through, while unarmed citizens, including pregnant women, elderly, people crouched to pray and children, have been subjected to violent action.

The origins of these imbalances clearly lie in the intolerance towards people with different thoughts than ours. In this particular moment in history, the Italian population is divided between those who see the green pass as a means of protecting the health of the community and those who see it as a means of social discrimination. Regardless of the position each person chooses to take, it should be emphasized that hatred and contempt for those who think differently should not be cultivated. In this era, we are witnessing the gradual abandonment of dialogue as an instrument of confrontation, which is so useful in preserving the healthiest institutions and developing the maturity of individuals. It seems that society is descending into a terrible collective immaturity, where repressed anger and negative feelings are vented in arguments between different factions.

The great Gentile philosophers of the ancient world, such as the well-known Plato, taught the importance of dialogue as a necessary tool for achieving interpersonal balance and the inner growth of individuals. All this is based on a confrontation aimed at reaching a common middle point between the parties, something that unites and highlights unanimously shared elements, achievable through the use of reason.

Nowadays, unfortunately, the purpose of the confrontation between two parties is no longer to reach a common middle ground, but has decayed into an attempt to overpower one part over the other: a search for self-affirmation and ego at the expense of the other.  This kind of culture is dangerous, because it does not aim to resolve differences and erase prejudices and hatreds, but rather cultivates them.

This can further escalate into the violence we have witnessed in recent days. We call on the entire population and the institutions to return to empathy, dialogue, human respect and affection that must bind people together, even in the face of those who think differently. Only in this way will we be able to reverse the loss of control over our actions and return to the cultivation of balance, which is fundamental not only to the political and economic growth of the Country, but above all to the spiritual growth of its citizens.

We would like to congratulate the Comitato 15 Ottobre for the peaceful method of their demonstrations and for their constant appeals to citizens to demonstrate in a Gandhian style, thus departing from other forms of violent demonstrations.

We would like to thank Dr Raffaella Regoli, journalist for the television program Fuori dal Coro, on Rete 4, for her consent to share images taken from her reports. Other images not extrapolated from them are taken from internet, among those in the public domain.